5 Reasons to Invest in Fantasy Sports App Development In 2021

All You Need to Know About Mean Stack Development

5 Reasons to Invest in Fantasy Sports App Development In 2021 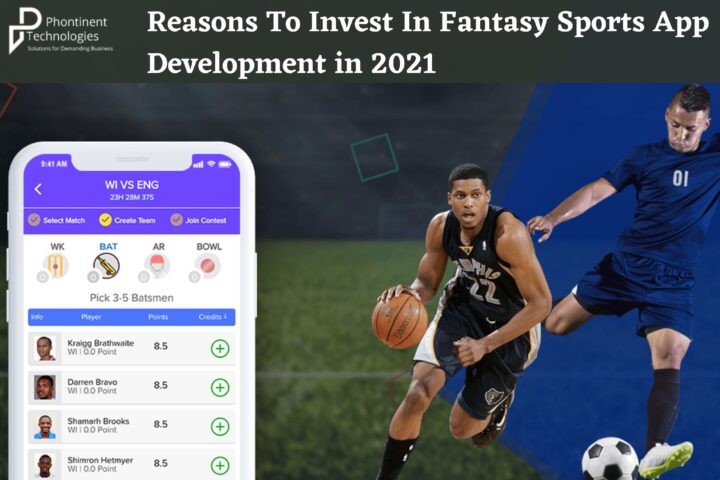 In Recent Years, the demand for fantasy sports platforms has increased considerably. With fantasy cricket apps being the most popular among all, it has huge revenue generation for companies. After the success of fantasy sports apps such as CBS and Draft, many companies are trying to come up with new strategies to become popular.

The future of the fantasy sports industry is going to be massive and if you are thinking of investing in Fantasy Sports App Development Services, 2021 is the perfect time for you. Want to  know how? Allow me to explain you. So without a further ado, let’s start!

Leagues That Contributes to Success of Fantasy Sports App

The success of your app largely depends on the popularity of the subject it deals with. Sports such as cricket and football are popular across the globe. There are a large number of cricket and football leagues coming in the next few months. The demand for fantasy sports app is expanding drastically during the mid-season of these leagues. Let us take a look at some of them:

One of the top T-20 cricket tournaments after IPL, Big Bash League is expected to start in late December this year. It is expected that over 59 matches will be played among 8 teams this season, which will be the highest number of matches played in all time. According to experts, this tournament has seen a considerable increase in its fan base over the last few years. Due to its increasing popularity and superior global exposure, this league can help you increase your customer base worldwide.

The T-20 world cup 2020 was postponed as a result of the covid-19 pandemic. But this year it is scheduled to play in India which is good news for diehard cricket fans. The last season of this tournament saw a dramatic increase in its viewership. According to experts, over 730 million people watched the last tournament from their homes which is 140% more than the tournament before. The size of the market justifies the popularity of this sport thus leading to an increase in demand for Fantasy Sports App Development. Therefore investing in this field will always be a win-win for you.

Founded in 1992, the Barclays Premier League or BPL is one of the top football tournaments played globally. Played by 20 teams, this tournament operates on the principle of promotion and relegation. The 2020-21 season was expected to begin in August 2020 But was delayed to September to increase in Covid-19. Top players from all around the world participate in this tournament annually. Due to the immense popularity of this sport, developing a fantasy sports platform will always be profitable for you.

Thus above-mentioned are the most popular upcoming tournaments of this year. These competitions not only enhance the excitement among sports fans but also ignite a rivalry among them. Fantasy Sports platforms offer a thrilling experience to the users and also give rewards after winning. As this concept is relatively new among people, therefore there is less competition in the market.

Why Invest In Fantasy Sports App Development In 2021?

Now that we know that this industry is never out of business, let us check out that why you should invest in a fantasy sports app and how can you capitalize through it:

As we have already discussed before, the concept of a fantasy sports app is relatively new among people. Only a handful of companies are performing well in this industry. Therefore, if you plan to enter this market with a unique app that provides innovative features to its users, now is the perfect time for it. Due to less competition, you will be able to attract more customers and secure your position in the market.

Fantasy Sports Apps are known to provide their users with a real-time experience. As nearly every person has a smartphone nowadays, the demand for online fantasy sports has increased even more. According to stats, it is expected that the online fantasy sports platform will grow from 18.6 billion USD to 49.2 billion USD by 2025. The customer base also saw a rise from 2 million in 2016 to 12 million in 2021. These stats are sufficient enough to support the rising demand in the global market, hence start investing today and become a major player in the sports industry.

Fantasy Sports Apps are widely known for their efficient user-engagement and fantastic gaming experience. They also help in attracting new customers. Due to this, various popular sports leagues also view these platforms as a golden opportunity to increase their popularity. Hence, by investing in these platforms you will get an opportunity to create relationships with these influential leagues. Not only it will boost your brand image, but will also increase your customer base.

Sports such as cricket, football, basketball have a vast number of fans. During league matches, lots of these people prefer to watch the game on their smartphones. In such cases, with an application that allows them to play and win real money is a win-win scenario for both users as well as business owners.

Imagine a scenario in which a big-league tournament like the T-20 world cup has started and your app is showing some major bugs. Or a situation in which your app’s basic functionalities are not working during the final match. Things like these can have a serious impact on your business if you decide to launch your app on the big day. We all know that not every application is flawless on the first attempt. Therefore, if you plan to launch your app a couple of months before the big matches, you will get plenty of time to identify all the problems of your app. You will also be able to understand the user’s behavior and be able to strategize accordingly.

We all know that the passion and enthusiasm for these kinds of sports is well-known all across the world. Although, the games are being organized with some restrictions at the moment still people are enjoying. So if you are planning to invest in Online Fantasy Sports App Development Services, then now is a perfect time.

At Phontinent Technologies, we provide the best On-Demand App Solutions in the US, UAE, and India. We offer on-time delivery of projects at nominal costs.